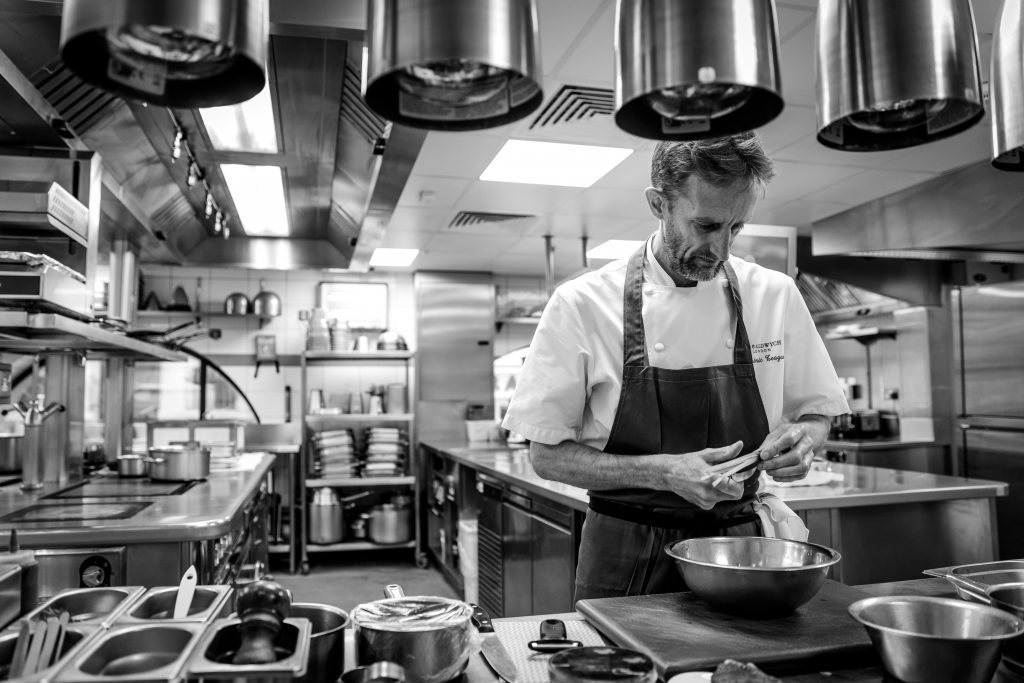 To be honest, when you watch Dominic Teague cook pretty much anything he’s doing will be a masterclass. In many ways his style of chef is a dying breed which is sad in the extreme. The numbers of classically French-trained British chefs are dwindling and with them are going a skill-set that will be much missed.

One of the benefits of editing The Great Game Guide is visiting chefs such as Dominic Teague at One Aldwych and Michael Dutnall at The RAF Club. These are two chefs who were grounded in the old classics and understand the old flavour combinations that have served both customers and chefs for decades before.

I understand the need for new and updated combinations. Food and dining would be dull and tired if it always stayed the same. However, some dishes just work. A good cook understands that, over time, and recognises that they are hard to beat despite all the best intentions. 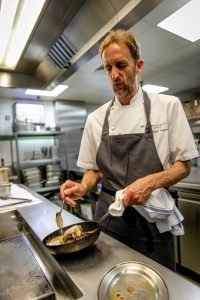 In the kitchens of One Aldwych Dominic Teague treated us to a favourite off the Indigo menu: a venison chop pan roasted and basted with endless quantities of butter and served with an old-school potato fondant which had been almost poached in butter. There was a dark red beetroot puree and baby beetroot that had been simmered and then had the skins taken off after cooking – a technique that Dominic explained kept the shine on the vegetable when it appeared on the plate. It was a technique he couldn’t remember being taught. It was one from the classics cupboard.

The flavours offered by pan roasting in butter with garlic and thyme cannot be replicated by water bath. The bath will bring consistency but it also brings something else with it. Older chefs know what that is. Younger chefs will discover it in time. Water bathing breaks down the cell structure of the meat in a different way to pan roasting and can end up having a different texture and a different flavour. It is up to the chef to decide whether the trade off is worth it. 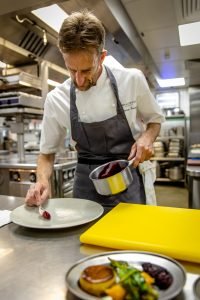 Old-timers, like me, are always overjoyed to be treated to a bit of good old technical cooking and watching Dominic Teague produce a flawless potato fondant was one such pleasure. When I first started to write about food professionally back in the mind 1990’s the potato fondant was new and vibrant. It was everywhere. Sometimes it was browned on its base and cooked in a small amount of stock and butter. However, the really good chefs did without the stock – as in the version Dominic cooked. The butter was flavoured with bay, garlic and thyme and the process was long and gentle. It was, predictably, delicious.

Why do I mention this? Because in the times we live in luxury, true luxury, is a currency. Dominic Teague cooked the whole dish in front of us – from start to finish. My son, Harry, who is a photographer and enjoys coming with me on these days had been to One Aldwych before when Dominic had cooked the best scallops either of us had ever eaten and wanted to come again.

He said to me afterwards: “Dad, it’s incredible. He cooked the whole dish for us. It was like it was private!”

What he said made me think how lucky I have been over the years to watch so many great chefs cook. I have picked up so many lessons, techniques and ideas by doing this and I heartily recommend that any chef, no matter how old or experienced, do the same. You can be taught to cook but watching, learning and tasting are the best ways.

Early on in my reporting days I remember being in the kitchens at what was then The Park Lane Hotel. It was during the time I was working as a chef myself. I’m afraid I was a very poor student as all I wanted to do was ask questions but was told that most chefs would not share their secrets. Especially pastry chefs. They were afraid that if they taught others they would lose their jobs. They became protective and often worked alone on the techniques they wanted to keep to themselves. 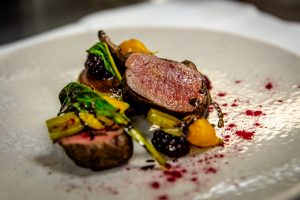 But, today, most chefs are happy to teach the next generation and I say make hay while cooks like Dominic Teague are still working. He trained with Marco Pierre White and, probably more importantly, with Jeff Galvin at L’Escargot in the days when chefs were happy to cook all the hours they could with no complaints. There was a waiting list to get a job at these restaurants. Nowadays, those fearless warriors who changed the face of British cooking on the world stage and struggling to find young chefs who want to be taught what they learnt. If this trend continues what was so hard-won will be lost in a generation and that would be very sad.