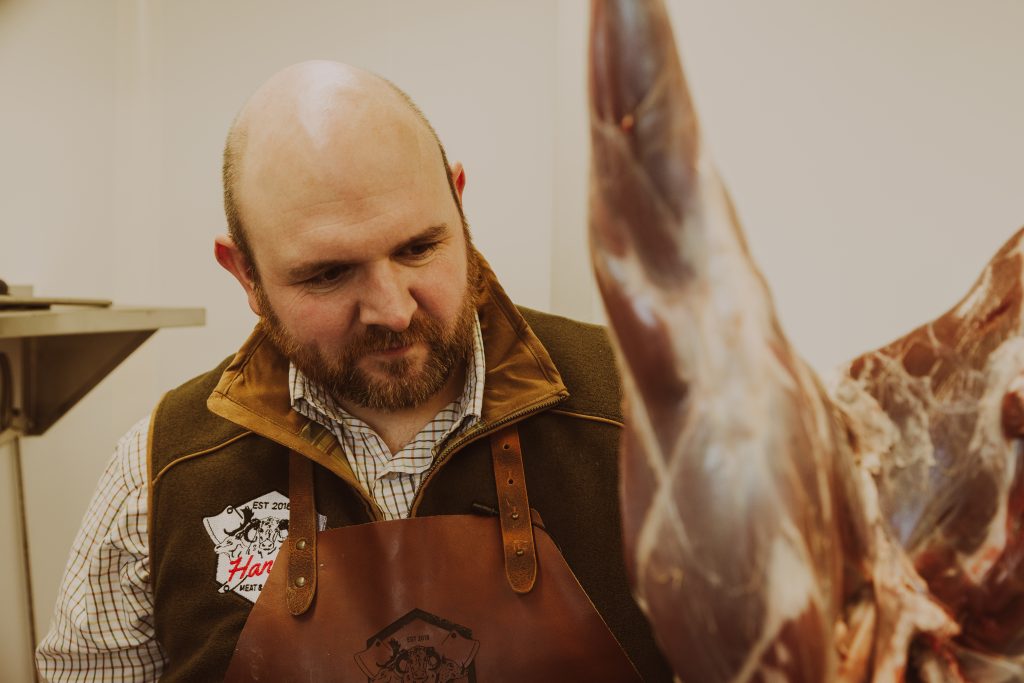 The Great Game Guide team couldn’t help but jump at the opportunity to visit Gundog Trainer of the Year and dog whisperer celebrity-owed Gundogs, Ben Randall.  Ben now has his own Gun Dog App and it’s proving a sensational hit among gun dog owners.

On arriving at his five-star training facility and luxurious boarding kennels in Herefordshire, we were so impressed, as it is clearly purpose built and family run ‘all hands to the pump effort’ twenty-four hours a day, 365 days of the year.

Ben and his wife Nikki welcomed us into their gun room, adorned with beautiful oil paintings of game birds and opulent furniture made from antlers, there was also a lovely collection of hand carved and painted ornate walking sticks, each with a different bird’s head.

It was great to introduce Ben to multi-award-winning butcher, Tim Hanks of nearby Hanks’ Meat & Game in Ross-on-Wye, who came to give a venison butchery masterclass to Ben and his family to show them how to get the most out of each deer carcass.

Ben’s father Keith has become a dab hand at making his own burgers, venison loin is a firm favourite with all the family and lean haunch steaks are a great way of packing in the protein for the boys whenever possible.

A ferocious log burner crackled away and kept us warm on what was a rather cold and blustery day and it was in this cosy room that we set up our cameras and began to create our film about Ben, his fantastic Fisher UK Stalker Deer Larder and his passion for shooting with his two teenage sons, Jack Joe and his father. 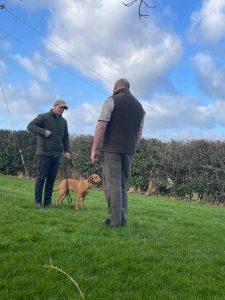 Ben’s passion for his craft as an expert gun dog handler shines through everything he does, he lives and breathes everything countryside and is determined that his sons maintain their love of shooting and harvesting wild venison as a form of sacred down time and relaxation together.

The boys are well on their way to a career in professional rugby and as such need to eat a great deal of protein.  Ben and Nikki have venison on the menu most nights of the week and are certain that their teenage sons massively benefit from this healthiest form of red meat.

“I love spending time with my sons out in the field as I did with my father.  There’s something romantic about spending hours observing the behaviour of a herd, then selecting an animal to shoot and take back to our purpose-built game larder.  To know that that animal will then be eaten by my family and I and any waste then to the dogs, we are using the whole carcass.  Having Tim Hanks here today is brilliant as its not every day that we get the opportunity to enjoy a venison butchery masterclass from the current game butcher of the year.” 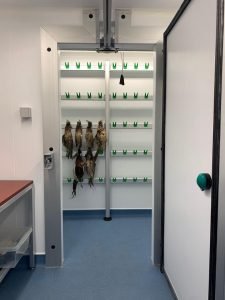 There we were at the home of Beggarbush Gundogs, humbled in the presence of a national champion gun dog trainer, a national champion butcher and a young rugby player set for stardom – Such a great amount of talent in one room, brought together by a common love of the countryside, game and beautiful, impeccably-trained gun dogs of course – What an honour it was to be able to capture all of these wonderful elements on film and in beautiful stills, while showcasing their new modular game larder, chillers and Tonon™ rail system, all constructed off site and supplied by Fisher UK.

Jon Fisher, Director of Fisher UK has installed Fisher Stalker Deer Larder at Beggarbush HQ, as many of Ben’s clients and associates could also benefit from such a brilliant set-up.

“I am delighted to be working with Ben to promote our range of compact Deer Larders, they are a vital part of the process to ensure ‘field to fork’ venison and game reaches the market in line with current game handling regulations.  Our range of compact larders are great for landowners, deer management groups and deerstalkers, they are completely prefabricated, and therefore require nothing more than connecting to power and water on-site.

Since meeting with Ben about the larder, he introduced me to the Gundog App which has been a revolution when it comes to my gundog training.  I’m always pressed for time but using the app allows me to train at a time that suits me rather than committing to set training classes, I really cannot wait to get back out in the field next season to see the results, I cannot recommend the app enough.” 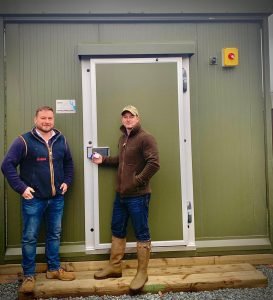 “It’s ever so clever when you think that this larder was built up in Yorkshire and brought down on an articulated lorry, then was craned into position.  The ground works had already been completed when it arrived, so it was then just a matter of plugging it in.  It’s wonderful to be able to butcher our own carcasses and the rail system makes for minimal handling – It’s a good job my strapping young grandsons can lift the carcasses up on to the gambrel hooks where they hang in the fur for a week, before we skin them and break them down into our favourite cuts.”

CLICK HERE for more information on the brilliant range of deer larders and butchery units offered by Fisher UK.

After a tour of the kennels and a show-round of the Beggarbush facility and training paddocks, we then met Hollie, a shiny black Labrador, one of Ben’s many gundogs. Hollie worshiped her master and wouldn’t move without his command.  It is this excellence in control that guns need when out in the field and an example of the perfect companion for stalking and commercial shoots. 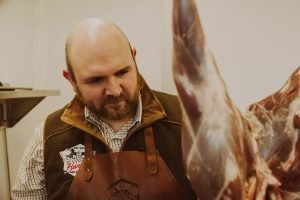 Tim Hanks then took to the butcher’s block with a whole carcass of local wild roe deer, harvested five days before in Herefordshire.  He proceeded to then break it down into primals and then boned-out the haunches.

On haunch was rolled and the other as seamed-out into topside, silverside and thick flank, which was then cut down into more manageable sized haunch steaks.

Finally, Tim boned-out the saddle and removed the back straps and removed the fat and the sinew, leaving the prime eye of the highly-prized loin which we then cooked and enjoyed in Ben’s beautiful country kitchen within the lodge.

“The most important thing you have to remember when breaking down a carcass of venison is to always make sure you’re comfortable when butchering meat and that the meat is not the ‘comfortable’ element, as this is how accidents happen.  The trick is to always ensure you have clean, clear surfaces.  We broke the carcass into primal cuts to make for easier handling when the butchery process is underway.”

Tim is very much looking forward to welcoming Ben and Nikki to his venison and wild boar butchery and cookery lesson in his recently launched Hanks’ Butchery Academy at Harts Barn Cookery School on the 9th March.

Anyone else who is interested in joining this fascinating session with a top local chef can click here to register and book their place.

The day finished with Ben showing Tim how to train his red Labrador puppy how to walk to heal and gave him some top tips on training her.

Ben has created a rather ingenious Gun Dog App, which gun dog owners can by and use as a constant reference guide for training their dog.