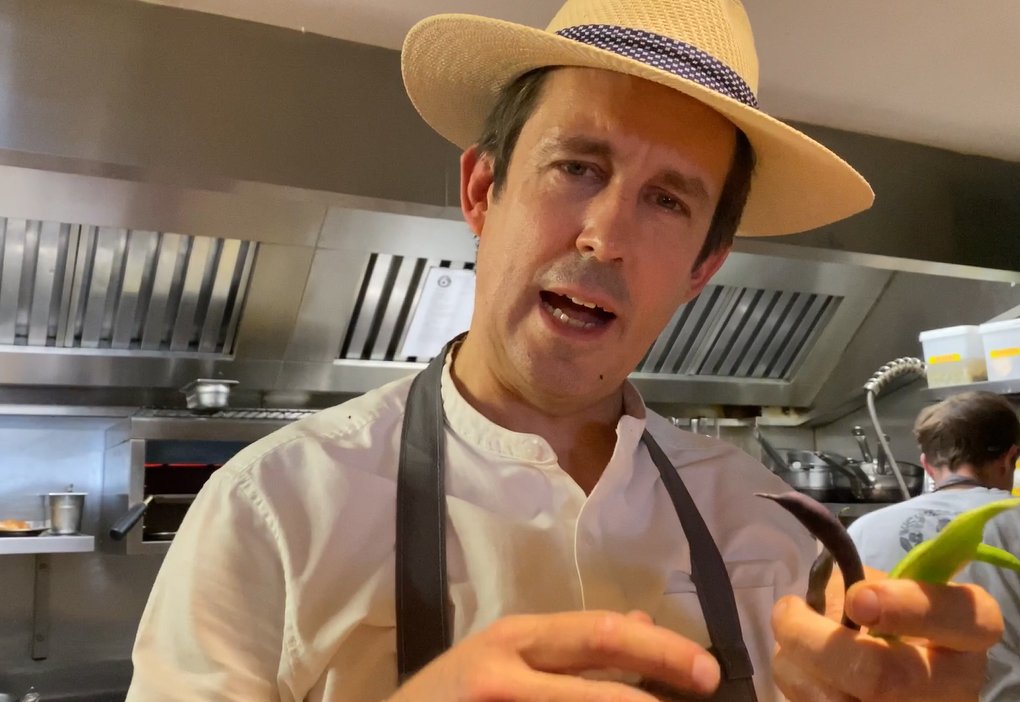 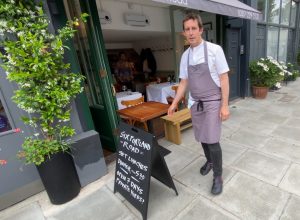 There are as many types of chefs as there are ingredients to cook and dishes to learn. But, throughout the history of the chef profession there are always those mavericks who have fearlessly gone in search of a style of their own. One of those is the brilliant Jesse Dunford Wood whose international training reads like the diary of an ancient seafarer. Scotland, Australia, America, England, London. Each place he landed and learned he added another level of skill and variety to his growing repertoire. 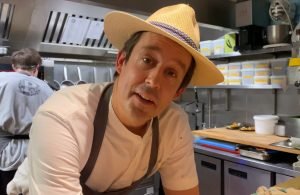 I first met him several years ago at Parlour in Kensal Rise where I found his take on neighbourhood cooking to be exciting, even breath taking, in its concept and execution. More recently I had the opportunity of watching him run the pass at 6 Portland Road – his small and perfectly formed new restaurant in London’s Holland Park.

Jesse was in his element resplendent in a summer hat and happy to allow me to film him as he worked and talked his way though the menu. I was there to see a new game dish – a summery stew of venison – but I saw so much more.

6 Portland Road is an exquisite little restaurant with wrought iron artwork by Jesse’s father Hugh Dunford Wood, which is worth a visit to see on its own. There was something deliciously eccentric about my lunchtime experience that warmed my soul. Cooking needs eccentrics. Indeed, without them the profession would lacking in spirit. 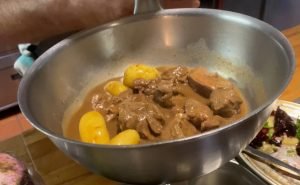 The venison dish in question was a rich, wine-laden, stew that had been, as Jesse explained: “summerised.” What he meant was that he had added summer ingredients to a winter warmer to  make it more appealing to summer guests. So, that meant beans and potatoes. Green beans, flat white beans, purple beans and hairy beans. These were poached in a buttery liquid that reminded me of Shaun Hill. The potatoes, pink fir apples, were cooked in the liquid of the stew. 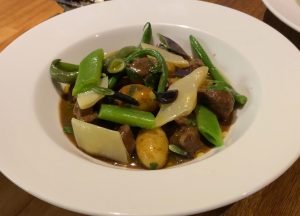 I watched fascinated as cod and veal chops were cooked “a la plancha” and various salads and cold meats were dispatched to the dining room. Nothing, however, managed to get under Jesse’s Wimbledon-style hat.

I love restaurants like this. They were once in vogue in the 1980’s and early 90’s. The food was always seasonal and freshly dreamed up. The chefs reacted to what was available as opposed to building a menu around their ideas. Tasting menus were a long way in the future.

6 Portland Road is a gem. It is not in our list of the top 100 game restaurants. Instead, we put sister restaurant Parlour in the guide. However, I didn’t want to pass up the opportunity of watching a great chef work a small kitchen and it was heartening to see game on the menu in an original way and doubly so by taking a winter staple and making it summery. Jesse fed me the stew for my lunch and I was so glad he did. It was delicious.