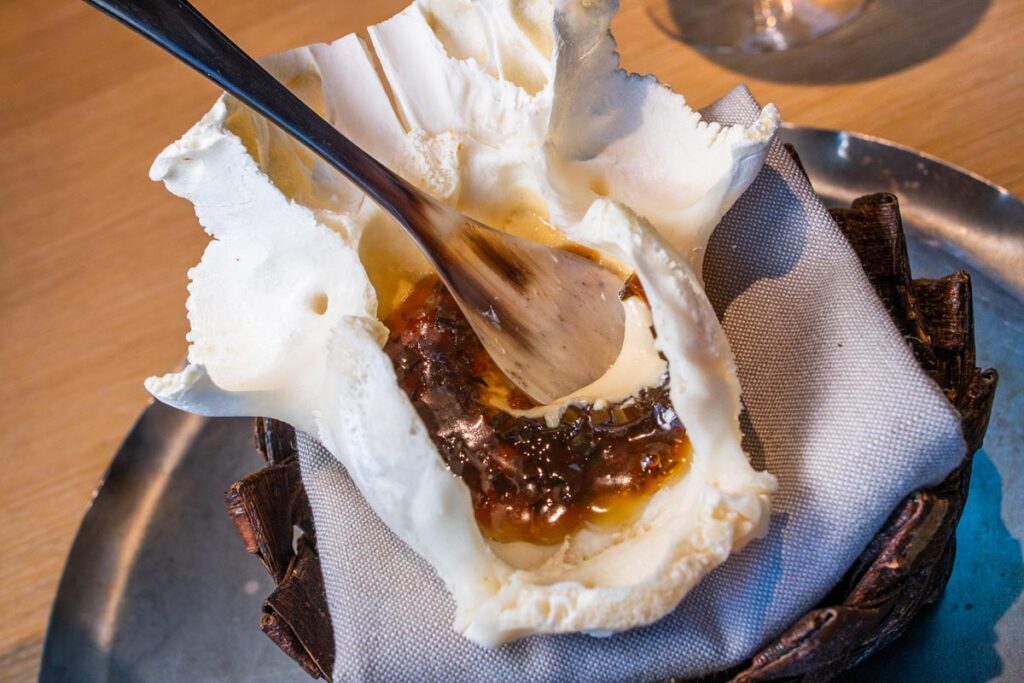 Reindeer Brains Served in a Skull. Fancy a Bite?

Brains are a tough sell at the best of times on a menu with only a few hardy chefs prepared to keep the faith. I’ve eaten all manner of brains in the past and enjoyed them. But I had to get used to the idea first, I must admit.

My initiation into eating brains came as a teenager on a solo trip arranged by my parents to a friendly family in Brittany. I was collected from the port in St Malo and taken to a nearby house of friends and took pride of place at a special dinner. Mid way through the meal a platter of lambs brains were produced. I can still see them and remember asking what they were and on finding out, after much long-winded translating, I can still remember my reaction: horror.

Later, after much cajoling I became fond of brains. Calves brains at Shaun Hill’s The Walnut Tree were exceptional. And that brings me to the inclusion of reindeer brains on the game and forest menu at Copenhagen’s Noma.

If you are unfamiliar with the hype of The World’s 50 Best Restaurants (an award I had a hand in inventing) the word Noma may have passed you by. It is the current best restaurant in the world and has been garlanded with the award several previous times.

It is a progressive restaurant in the Nordic style. Put short this means that things are paired back, there’s a lot of foraging and usage of everything combined with exceptional craft and, most importantly: a genius-bordering ability to present the food in interesting ways.

So, here’s the scene. You can watch it in the attached video from acclaimed Danish food blogger Anders Husa (worth a follow if you are a restaurant lover). Try to set aside the, frankly, ridiculous overlaid music, if you can!

A plate arrives at the table and on it is a reindeer skull. You are invited to pick it up and discover what is underneath it. So far so what. But Noma’s geniuses don’t stop there. There is nothing under the skull. What you have to do is look inside the skull by turning it upside down and there you find a custard of reindeer brains that you scoop out with a spoon – we don’t see that bit.

What do you do at this point? I’ve eaten rabbit brains with Pierre Koffmann out of the head. I’ve eaten woodcock and snipe at Le Gavroche with the head on the plate. But, I’ve never been invited to scoop out a brainy concoction from the skull and it made me wonder about how far the eating of game can go before the practice becomes a little on the weird side.

However, having said that, I also applaud Noma for not being afraid to push boundaries and, funnily enough, game is one of those ingredients where the body or carcass of the animal or bird is actually a real part of the prize. We should be celebrating the whole carcass. Deer liver is one of the prizes of a shot deer. So much so that it’s often kept by the gamekeeper.

What Noma have done here is draw attention to something that many cooks and chefs ignore: the head. It’s brave and challenging and probably delicious. What do you make of it?

Reindeer Brains Served in a Skull. Fancy a Bite?