Why Venison is the Perfect Protein for Hospital Patients

East Lancashire Hospital, in Blackburn, Lancashire is on a mission to both inspire its chefs and to give patients proper, local, food. We caught up with Facilities Manager Tim Radcliffe to find out more about how game is winning over hearts both on the wards and in the staff restaurant.

“It all started when I had a conversation with The Game Alliance, “ Radcliffe explained. “We wanted to use game on our menus but because we had a fresh cook model we couldn’t use pre-made dishes. We had to get the meat in raw if we were going to use it. We started with venison from the Scottish Borders.

“However, we wanted to get even more local and a conversation with the Soil Association led us to meeting up with Forestry England and before we knew it we had access to venison from The Forest of Bowland which is local to us.

“Out first experiments were a gamekeeper’s pie and a venison pie. In my opinion there is a great benefit to using local and being British focussed. We recently won Hospital Caterer of the Year and an award from Love British Food for being the joint-best promoter of British food during British Food Fortnight.

“It hasn’t been easy. The cost of using game is not the same as some other ingredients but it’s all a balancing act. On the day game is on the menu it’s the most expensive dish. But there are other days when we don’t use expensive ingredients so it balances out.

“But what is really rewarding is that the venison pie is our most popular dish when it’s on. 30% of our patients choose it out of a choice of six. This means a lot. Game is the perfect meat for hospitals – it’s local, sustainable, low in fat and contains good nutrients to aid recovery.

“Hospital food gets a bad press but it doesn’t need to be this way. We want to inspire our chefs by using good ingredients and passing this on to our patients and to our staff. 80% of the dishes on the patient menu are also served in the staff restaurant – so everyone gets the benefits. 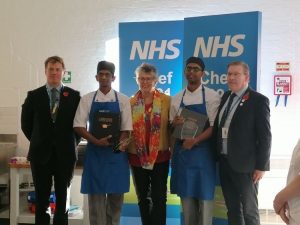 “Indeed, we took part in the inaugural Hospital Chef of the Year competition – and our chefs won the event!”

East Lancashire Hospital are trailblazers and their use of venison on the hospital menus and their investment in skills training has meant that the kitchens are now able to provide an excellence in cooking that is being recognised on a national level.

“The result means that we have the two best hospital chefs in the country,” Tim continued. “We’re at the forefront of hospital catering and it means I can go to my bosses and say: “If I can do this with the equipment we’ve got and the chefs we have, imagine what we could do if we invested more.” It’s a huge shot in the arm for us as a team.”

Why Venison is the Perfect Protein for Hospital Patients